When you book with an account, you will be able to track your payment status, track the confirmation and you can also rate the tour after you finished the tour.
Sign Up
325

Why Book With Us?

Do not hesitage to give us a call. We are an expert in Morocco and we are happy to talk to you.

4 Days Tour from Fes to Marrakech

This 4 days tour from Fes to Marrakech takes you through some of Morocco’s most beautiful and iconic landscapes. From the historic city of Fes to the snow-capped Atlas Mountains, to the Sahara Desert and finally to the vibrant city of Marrakech, this trip has it all.

You will see some of the most iconic sights in Morocco like Ksar Ait Benhaddou, and the popular cinema studio that has been the source of some of the most famous Hollywood movies; not to mention the experience of desert camping and camel trekking.

4 days tour from Fes to Marrakech takes you back in history. It is a tour of discovery in which you will:

The driver will pick you up from your hotel in Fes and your journey towards Merzouga Desert begins. We first make a stop at Ifrane. It is a beautiful town located in the Middle Atlas Mountains of Morocco. The town is known for its clean streets, fresh air, and lovely architecture, a magic mixture that create a pleasant and refreshing atmosphere.

We then continue our journey through the cedar forests of Azrou. This journey is like something out of a fairytale. The massive trees provide a canopy of green overhead, and the air is filled with the scent of pine. As we travel, you may catch a glimpse of a monkey swinging from branch to branch. Eventually, the forest gives way to the Middle Atlas Mountains, and the landscape changes dramatically. After winding your way through the mountains, you begin to descend towards the Sahara Desert. Halfway to your destination, you stop for lunch in the town of Midelt. This small town is famous for its fossils and rocks, and it’s a great place to stretch your legs and enjoy a leisurely meal.

We finally arrive at Merzouga Desert in the evening. You will have a traditional Moroccan dinner and you relax in your hotel.

After breakfast, we drive towards Khamlia Village. It is a small village located in the Sahara Desert. It is populated by black people who were brought there as slaves during the slavery era. Despite its dark history, the people of Khamlia are kind and friendly. They are also very passionate about their music and dance. The Gnawa music is a popular genre in Khamlia and it is often used to accompany traditional dances. You will get to experience the hospitality of people here.

We continue our journey through the desert stopping for a cup of tea and lunch with nomads. Then we return to our hotel and leave for the desert for a camel ride. You can experience a true adventure by taking a camel ride through Erg Chebbi.

The Erg Chebbi is a large erg or sand sea spanning over 25 km2 in the southeast of Morocco. The erg consists of a series of transverse dunes that extend for about 20 kilometers from end to end. With peaks reaching up to 150 meters above the surrounding desert plains, they are among the tallest dunes in the Sahara.

While you are on your camel ride, you will get to witness the most beautiful sunset. As the sun slowly dips below the horizon, the sky is set ablaze with a spectrum of colors. The desert sand glows a fiery red. The landscape is transformed into a sea of colors. For a few moments, all is still and tranquil. Then, as the last sliver of sunlight disappears, the desert is plunged into darkness. The stars come out, shining brightly in the inky sky. The moon casts a pale light over the landscape, and the night creatures begin to stir.

Dinner and overnight stay in a tent.

If you wish to see the sunrise as well, be sure to wake up early in the morning as its the most beautiful sunrise you will ever see. The sky ablaze with colors, as the sun slowly makes its way over the horizon. The scene is truly breathtaking. The colors gradually changed as the sun rose higher in the sky, and the landscape took on a new beauty.

Now, after breakfast, you drive towards Ouarzazate. We make a stop at Erfoud. It is  well-known for its production of marble fossils. The city is situated near the Atlas Mountains, and it has a long history of quarrying limestone and marble. The fossilized marbles of Erfoud are famous for their intricate patterns and beautiful colors. In the city’s workshop, you will have the opportunity to see how these fossils are made.

Then we continue and arrive at Todra Gorge. The gorges are a popular destination for tourists and hikers, and offer stunning views of the surrounding mountains and valley. They are home to a variety of wildlife, including eagles and vultures.

The gorge is a narrow canyon with walls that rise up to 300 metres high in places. It’s a popular spot for rock climbing and hiking.

After lunch, you continue to travel along the road of 1000 Kasbahs to reach Ouarzazate. Dinner and overnight stay in a hotel.

Ouarzazate is a city in central Morocco known for its movie studios and film festival. This city is called “the door of the desert” because it is located on the edge of the Sahara Desert.

After breakfast, we head towards Atlas Studio. It is a world-renowned recording studio located in the heart of Morocco. Since its inception in the early 1970s, Atlas Studio has been responsible for some of the most iconic recordings of all time. From Led Zeppelin to the Rolling Stones, countless artists have made the trek to Morocco to record at Atlas Studio.

In recent years, Atlas Studio has become a mecca for film and television producers looking to capture the essence of Morocco. Game of Thrones, Homeland, and Body of Lies are just a few of the many productions that have filmed at Atlas Studio.

Then, we move on to visit the Kasbah Ait Benhaddou. It is a UNESCO World Heritage site. The site is known for its earthen architecture, which has been used as a filming location for many movies and TV shows set in the desert. Ait Benhaddou was once an important stop on the trade route between Marrakech and the Sahara Desert. The site is now home to around 300 people, who live in traditional earthen dwellings.

After our lunch, we leave for our final destination, Marrakech. We will arrive at Marrakech late in the evening. The driver will drop you off at the hotel.

Here your 4 days tour from Fes to Marrakech comes to the end. We hope you enjoyed it. 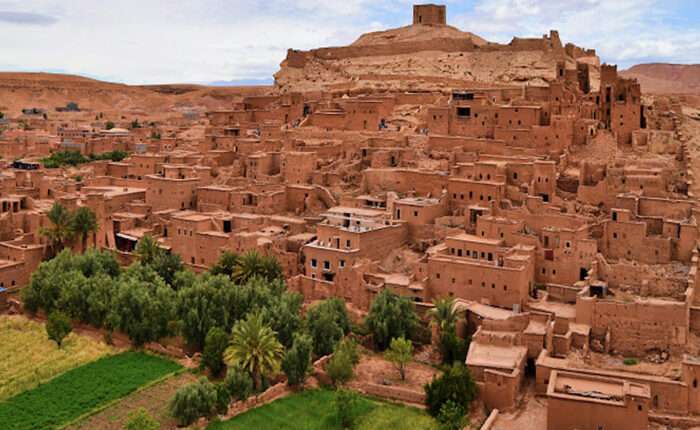 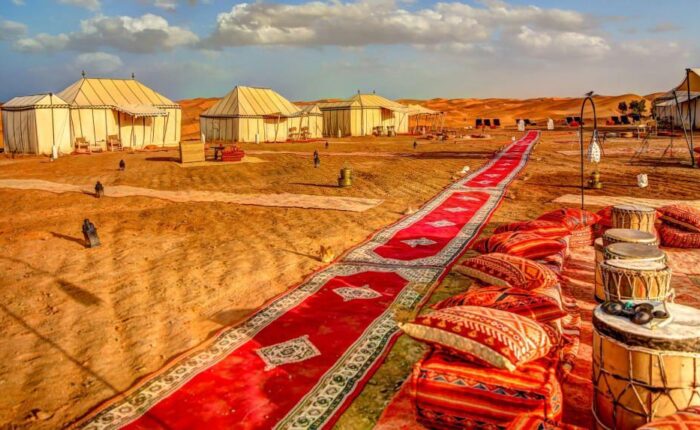 0
Would you like to visit Morocco? Drop us a message and let us help you with your tour. We design itineraries, book hôtels, organize trips..etc.
Said Boo
Tour Designer