When you book with an account, you will be able to track your payment status, track the confirmation and you can also rate the tour after you finished the tour.
Sign Up
1665

Why Book With Us?

Do not hesitage to give us a call. We are an expert in Morocco and we are happy to talk to you.

Discover Morocco on an incredible 7-day journey that travels from Casablanca to Marrakech via the Sahara Desert. The country’s ancient and imperial cities will be seen during this 7 days tour from Casablanca, leaving you with wonderful memories.

You will also travel through the Middle and High Atlas Mountains, experience Merzouga’s breathtaking Sahara desert, and spend the night in a desert tent. Visit a number of unique Berber communities and natural attractions, such as gorges, valleys, and Kasbahs.

On your seven-day trip to this African country, you’ll soon be wandering the enchanted alleyways of Fes in search of artisans and the oldest university in the world.

Take this 7 days tour from Casablanca to experience the magnificent architecture, culture, and tradition while exploring the Sahara Desert, Imperial Cities, and Atlantic Coast Beaches. Explore the world’s oldest cities, go off-roading in the Erg Chebbi Dunes’ deep dunes, and unwind on the sand beaches. Simply purchase your ticket right now, and we’ll plan the ideal tour for you.

During your travels, you will spend a few days in the fabled and mystic medina of Marrakech, where snake charmers and fate tellers will lure you and try to convince you to put off (for the time being) your gift-buying in the souks.

Then be ready for an incredible tour of Morocco! You’ll use your seven days to discover the most breathtaking sights in this country. Choose your starting location and don’t miss the opportunity to see all of the country’s natural splendors from North to South.

In this tour, you will :

Casablanca is the best portrayal of the contemporary country, while not being as evocative as other Moroccan towns. Young Moroccans travel here to seek their fortune, and this is the centre of business and the creative industries.

We pick you up from your place of lodging or Mohamed V Airport to begin our 7-day tour from Casablanca to Marrakech. After visiting the mosque of Hassan 2, travel to Rabat, The Hassan Tower, which serves as both Rabat’s and Morocco’s national symbol, is the first must-see location to see. The tower was once planned to be the minaret of the biggest mosque in the Muslim world, but sadly it was never finished. Visit the Mohammed V Mausoleum, which contains the sarcophagi of King Mohammed V and his two sons, Hassan II and Moulay Abdellah.

After lunch, following that, you will go to a city that has been recognized as a UNESCO World Heritage Site since 1996 for its representation of a seventeenth-century capital of the Maghreb that successfully integrates Islamic and European style and planning.

Then, we’ll see the Volubilis Roman city’s remains. The archaeological site in Moroccan territory serves as a reminder of how Rome formerly traversed this area. After that, we’ll keep on to the magnificent city of Fez, where you’ll spend the night. Riad lodging with breakfast and dinner

Day 2Fez, exploring one of the best Morocco cities

After breakfast, you will go with a native guide to Fez. You will have time to bargain in the infinite souks of Fez el-Bali, enjoy a cup of coffee on the terraces of the new Fez, see the historic Koranic schools, and reflect on the countless artisans working in vanished crafts.

It is customary to begin your medina exploration at the Bab Boujlloud Gate. The enormous Bou Inania medersa is the gorgious monument to see. Before reaching the mzara (shrine) of the old king Moulay Idriss, which is located at the location where he made the choice to create the town, you will be able to see the Tijani zaoua (zaoua, sanctuary of a religious fraternity) and the instrument manufacturers’ souk.

You’ll be able to experience your own version of “The Arabian Nights” in Fez, where everything is fantastical and out of the ordinary. Fez offers you a unique and unusual experience on a stage made out of djellaba, rugs, and gorgeous lighting. You will have enough time to explore the magnificent Medina. Riad lodging with breakfast and dinner

opportunity to see all of the country’s natural splendours from North to South.

Day 3Fez - Merzouga. Camel ride in Erg Chebbi Dunes and a night in a lux camp

The fourth day is the longest; following breakfast in a Fez-area riad, you’ll travel south on a road trip to the centre of the desert. You will start your journey early and soon start climbing the Middle Atlas mountains.

This is Ifrane, locally known as “the Moroccan Switzerland.” This is due to the peculiar architecture of the area, which has gabled roofs and is more Alps-like in style than it is at these latitudes. It does, however, have a highly humid climate with plenty of snowfall in the winter and an atmosphere dominated by white the rest of the year due to its elevation (about 1,700 metres above sea level) and location between mountains.

Your next excursion is to the nearby Azrou adjoining Ifrane National Park, which is rich in cedars. Because it is home to a sizable population of Barbary macaques, an endangered species and the only primate found north of the Sahara, it is frequently referred to as the “Monkey Forest.”

After exploring this strange region, you’ll head out on the road and into the Middle Atlas. At that point, you’ll start your descent into the Ziz Valley, where farms and palm trees flourish despite the area’s extreme aridity.

You will reach Erfoud, a little town well-known in the field of palaeontology for the significant fossils discovered there, including several dinosaurs, along this path. After travelling more than 650 kilometres from Casablanca, where the expedition started, you will soon arrive at Merzouga.

You will simply switch modes of transportation in Merzouga; our car will remain parked, and you will all ride dromedaries across the magnificent Erg Chebbi dunes, which have an amazing texture and colour.

After a couple of hours of silent trekking, you’ll reach our tent camp in the middle of the desert. According to local customs, they will have dinner and a cup of Berber tea ready for you when you arrive.

Your lodging will be in one of the tents, which has all the comforts inside and is built in the traditional manner of desert nomads. The gorgeous starry sky outside, on the other hand, will glow with a strength and purity that are unmatched anyplace else in the globe.

Your camel guide will wake you up early in the morning on the 4th day of this 7 days tour from Casablanca to view what might be the most beautiful sunrise of your life. Back at Merzouga, you’ll make the hike. The stunning Erg Chebbi sand dunes, which change in beauty as the day goes on, are something you can’t help but notice as you travel.

Afterwards, you’ll depart for the Rissani, Tinghir, and Todra gorges after taking a shower in your riad and eating breakfast due to the fact that they are Morocco’s highest and narrowest gorges.

Following a hearty lunch in the gorge, you’ll drive into the Dades Valley, where you can admire the magnificent sand castles and incredible rock formations known as “monkey toes.” Finally, a posh inn with views of the Dades valley will serve as the place to stay the night.

You will travel through the Dades Valley to reach Kalaa M’gouna and Ouarzazat after breakfast at the hotel. We will go to Kasbah Taourirt, a fortified fortress with approximately 300 chambers and a confusing network of corridors. This enormous building is only accessible from the outside through a tiny opening. This spectacular edifice was undoubtedly an effective demonstration of the clan’s riches and power when it was constructed in the 19th century by a wealthy local family with influence over the caravans’ economic routes. The Ouarzazate Film Museum is located next to Kasbah Taourirt. We’ll stop at a nearby restaurant for lunch after the museum visit. The visit to the Cinema Studios will take place in the afternoon.

With its initial studios opening in 1983, Ouarzazate is well known as the Hollywood of Africa and draws the film industry with its affordable labour and stable political climate. The Atlas Studios, CLA Studios, or both, depending on availability, provide guided tours where you can find out more and see the locations where well-known films were shot.

We will pass through a few small villages before beginning our ascent to Morocco’s highest pass, the Tizi n’Tiska pass, after roughly an hour of driving. We must pause here to stretch our legs and to take in the breathtaking scenery. After there, we’ll head for Ouarzazate. The greatest preserved desert Kasbah in the nation and a UNESCO monument is Ait Ben-haddou, where we’ll make our next stop. The day’s activities are completed with these visits, and we are now prepared to return to Marrakech.

You will take part in a morning guided tour of Marrakech, “the Red City of Morocco,” following breakfast in the riad on this 7 days tour from Casablanca. Your guide will therefore make sure that you see all the places of historical and cultural interest, such as the Ben Youssef Koranic School, the Koutoubia Minaret, the Saadian Tombs, and the lovely Palace of Bahia.

Before reaching the well-known Jamaa El Fna Square, finish the morning by strolling through the medina’s alleyways and getting a chance to view all of the many artisans at work.

Lunch should be had at a restaurant close to the square, followed by a visit to the Majorelle Gardens and a quick tour of Gueliz, Marrakech’s new city, in the afternoon.

You can choose to take a stroll through the square after supper and be entertained by magicians, storytellers, toothpullers, and food vendors. Finally, you will spend the night at your riad.

The driver will transfer you at the airport based on the specifics of your flight. Even while it makes us happy when the tour goes as planned, it is one of the aspects of our profession that we detest the most at that particular moment. We develop relationships, exchange secrets, and share our lives after 7 days of traveling together. True, it has never been easy to say by.

Once you’ve checked in and been picked up by the driver at the airport, it’s time to catch your flight home, full of tales to tell. 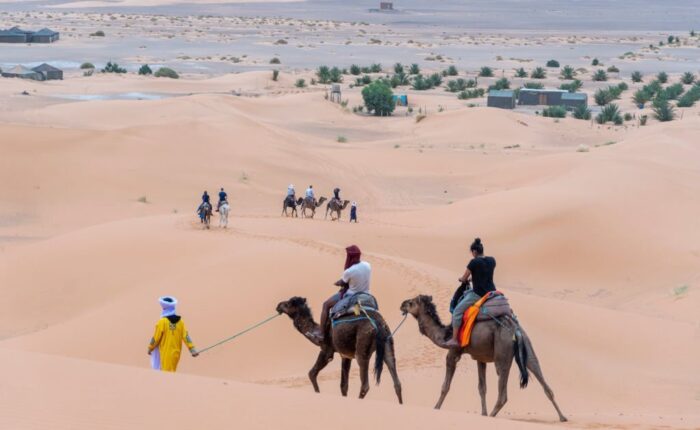 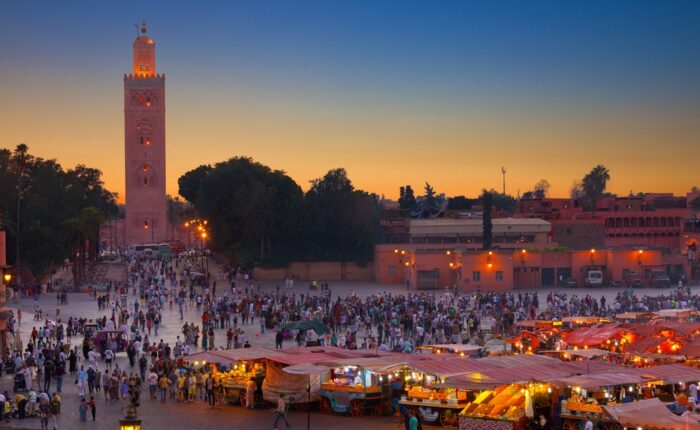 0
10 travellers are considering this tour right now!
Would you like to visit Morocco? Drop us a message and let us help you with your tour. We design itineraries, book hôtels, organize trips..etc.
Said Boo
Tour Designer